How much Everest base camp cost get the ideas

Tallest Mountain in the World 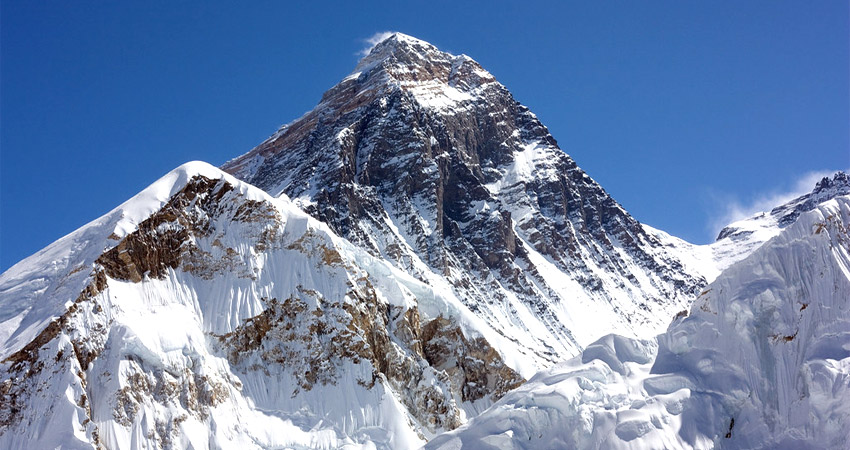 Mount Everest is Earth’s highest mountain above sea level, located in the Mahalangur Himal sub-range of the Himalayas. Mt Everest is the highest peak in the world, located in the Northeastern part of Nepal. The elevation of Highest Peak Mount Everest has 8848m (29,029 ft.) above the sea-level. Mount Everest is called “Sagarmatha” in Nepali or Chomolungma in Tibetan. This mountain lies in the number one position of Top 10 highest mountain in the world. Mt Everest got its name after a survey by the Land Surveyor General ’Sir George Everest’ that first tried to locate the exact position of the peak.

Tenzing Norgay Sherpa and Edmund Hillary became the first-ever people on earth to climb Mount Everest in May 1953. Everest base camp trek is the most popular trekking package in this region. Additionally, you can see some rare species of flora and fauna inside Sagarmatha national park. Some of the rare animals found here are Red Panda, Musk Deer, and Snow leopard, Himalayan black Deer, Himalayan Thar, Langur Monkeys, Martens and Himalaya wolves. Sagarmatha Nation Park is also included in the world’s heritage site by UNESCO. Gokyo Lake is another highlight of the Everest base camp trek.

Mt Everest got its name after a survey by the Land  Surveyor General ’Sir George Everest’ that first tried to locate the exact position of the peak. Tenzing Norgay Sherpa and Edmund Hillary became the first-ever people on earth to climb Mount Everest in May 1953. Everest base camp trek is the most popular trekking package in this region. 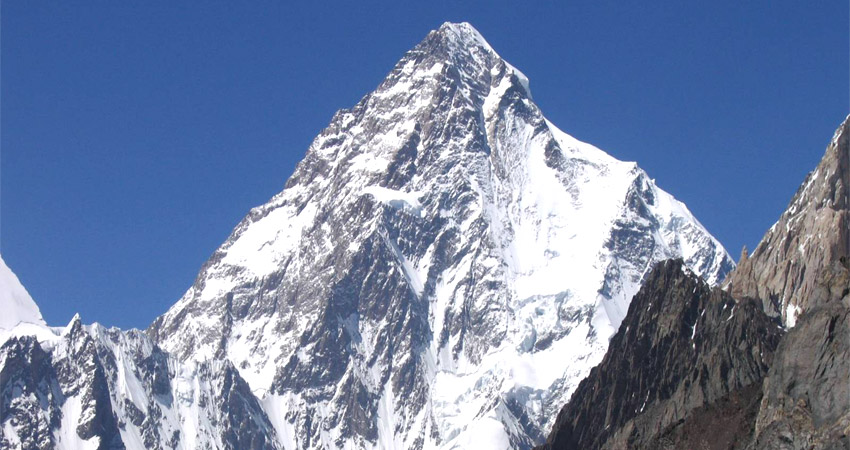 Mount K2 is the world’s second-highest mountain (8611m) after Mount Everest. It is situated on the border of China and Pakistan. It is also the highest point in Xinjiang as well as Pakistan. The name K2 stands for the 2nd peak in the Karakoram Range. Climbing to K2 is a challenging task, but still, about 250 climbers have successfully reached the top of K2. So it is even called Savage Mountain. However, vast ice pyramid stands away from all the rest of the peaks of K2. Italian expedition was Tech became the first to climb Mount K2 in 1954. This is in no 2 in the top 10 highest mountains in the world.

Mount K2 is also known as the mount Godwin Austen as col.H.H. Godwin Austen was the first to survey the peak. As mount K2 has been difficult to climb it is the only among the eight thousand peak which has never been climbed during winter from its east face. Mount K2 base camp is located in Pakistan. People tend to choose route from Pakistan rather than from china for climbing. 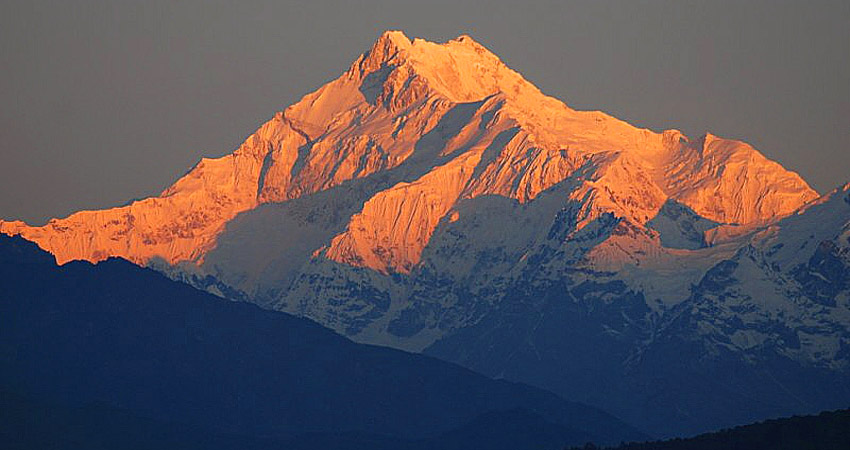 Kanchenjunga is the third highest mountain in the world, height with 8586 meters. It is located in both parts, Nepal and India. It is the highest mountain in India and the second-highest amount of Nepal. Kanchenjunga is also known as “The Five Treasures of Snows” because it is blessed with five treasures of God that are gold, silver, gems, grains, and holy books. Joe Brown and George Band successfully climbed it as the first people of the world in 1955. It is situated at a distance of 78 miles from Mount Everest. Kanchenjunga is the second least climbed mountains.

Mount Lhotse is the fourth highest mountain in the world. Its height is 8511 meters. Mount Lhotse is connected to Mount Everest. It falls on the south of Mount Everest in the Khumbu region. It is a perilous and dramatic rocky route. Lhotse is located on the border of Nepal and Tibet. It is also known as one of the most deadly mountains in the world, because of many failed attempts and fatalities while trying to climb. In addition to this, Mount Lhotse is the most dangerous mount to climb because of Khumbu’s icefall. Ernst Reiss and Fritz Luchsinger successfully climbed this peak in 1956. 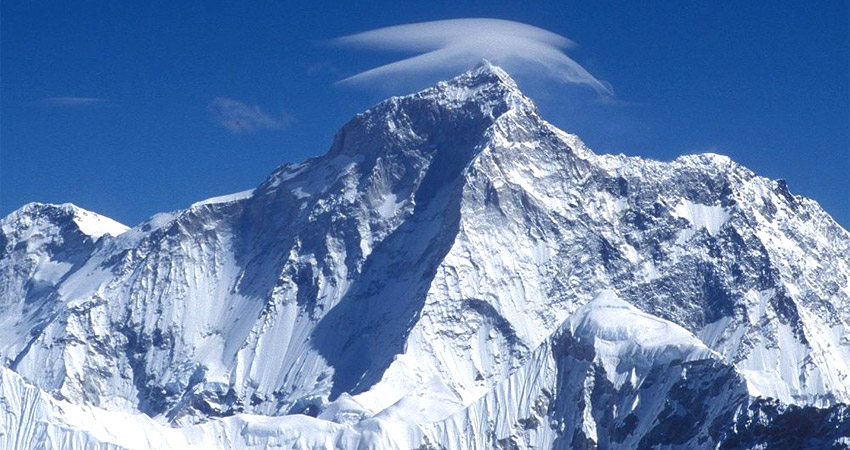 Mount Makalu is the fifth highest mountain on the earth, with an elevation of 8463 meters. It is located at the Mahalangur range and about 19km southeast from Mount Everest. Makalu has very sharp edges and steep pitches, making it quite tough to climb. Especially, this is an isolated peak whose shape is a four-sided pyramid. Lionel Terray and Jean Couzy successfully climbed this peak in 1955, as first people on the earth to climb it. 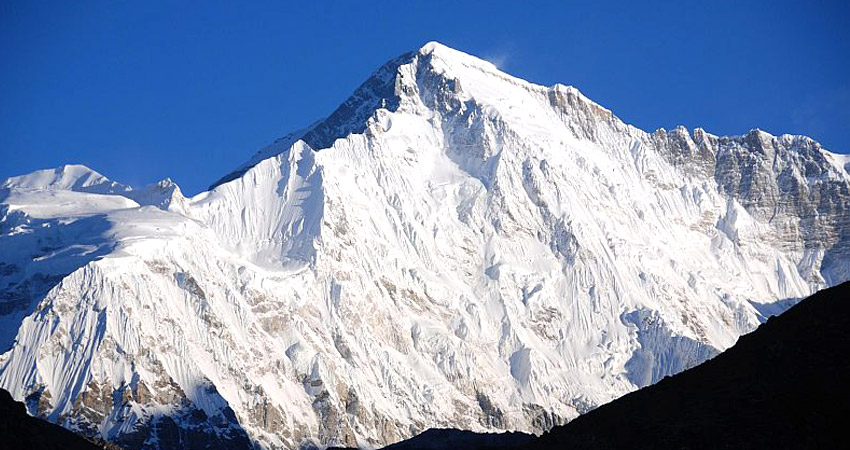 Mount Cho Oyu is located in the Himalaya range and Nepal, a sixth highest mountain in the world. Its height is 8201m meters. It is one of the most accessible mountains to climb. H. Tichy, S. Jochler, Pasang Lama was the first man who reached on Cho Oyu in October 1954. Cho Oyu mountain is the the “Turquoise Goddess” in Tibetan. It lies on the border of Nepal and China. Mount Cho Oyu also lies in the Mahalangur range and 20 km far away from Mount Everest.

You can climb mount Cho Oyu from three sides northwest, northeast, and the Southeast. Mount Cho Oyu is not that hard to climb and many trekkers climb mount Cho Oyu before climbing Mount Everest as a practice and experience. Ang Phiri Sherpa was the first Nepali person to climb mount Cho Oyu. Moreover, you can see many other eight-thousanders’ mountains while climbing Cho You. March through May as well as September through December is consider the best months for climbing mount Cho Oyu. You will have to cross through three more base camp and a final Advanced Base camp before you reach to Cho Oyu base camp.

Mount Dhaulagiri is the seventh highest mountain in the world, located in the north of central Nepal. The elevation of this Peak is 8167 meters. Dhaulagiri has become the pivot point of the tourists and climbers. The name Dhaulagiri means “White Mountain,” Dhaulagiri also called the White Mountains for being one of the eight thousand lists. K. Diemberger, P. Diener, Nyima Dorji, Nawang Dorji, climbed it in May 1960. The route through Dhaulagiri goes through the world’s deepest gorge Kali Gandaki. Winter is considering the best time for trekking to Dhaulagiri as you can get the best view. Dhaulagiri is also calling as the highest mountain by Europeans. And it is also the highest point in the Gandaki basin. Generally, Dhaulagiri is deriver from Sanskrit word dazing, white and beautiful surely is the white beauty. 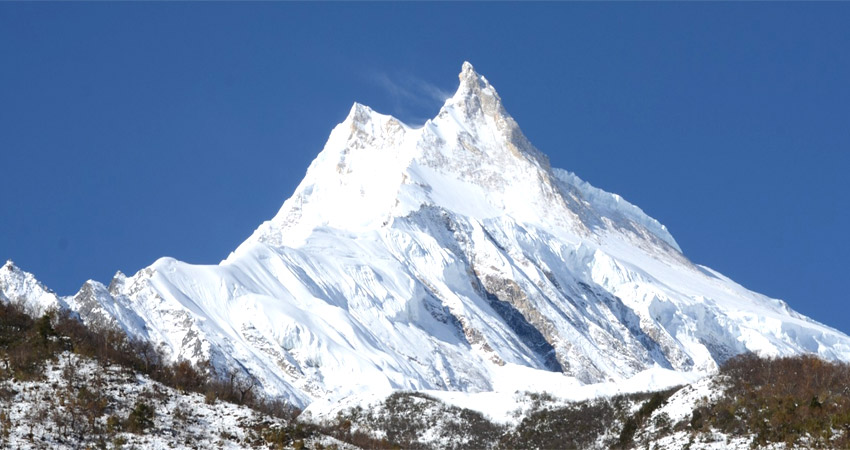 Mount Manaslu is an eighth highest mountain in the world, located in Nepal Himalaya with an elevation of 8163 meters. Surrounding by rock hard ice, which covers a large area at the bottom of the mountain, is one of the most exciting things to see. The meaning of the Manaslu is “Mountain of the Spirit.” T. Manisha from Japan became the 1st ever person to climb Manaslu in 1956. That is why this mountain is famous among Japanese people.

Manaslu is a Sanskrit word that means soul. This mountain is in the no 8 of the list of top 10 highest mountains in the world. It lies at the distance of 64 km east from mount Annapurna. Manaslu base camp lies on the elevation of 4700-meter form the sea level. It is located in the Gorkha district of Nepal. Trekking in Manaslu has start from since in 1991. Manaslu conservation area is a place where many plants and animals which are about to be extinct here. The conservation area covers the area of 642 square. Km. mount Manaslu is moderate level trekking. Luckily, Mount Manaslu is among the world fourteen thousand. 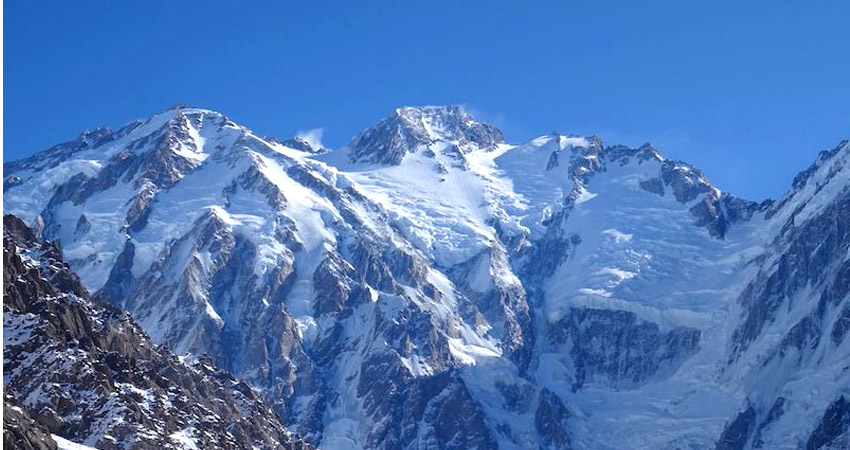 Nanga Parbat is the world’s ninth tallest mountain in the world. It is located on the south side of the Indus River in Gilgit Baltistan, Pakistan. Nanga Parbat means “Naked Mountain.” The elevation of this Peak is 8125 meters. It also names as the Killer Mountain because lots of climbers died in the first half of the twentieth century. Hermann Bahl from Australia was the first one to ever climb Nanga Parbat in 1953. This is one mountain from Pakistan in the list of Top 10 highest mountains in the world. It is the second-highest mountain of Pakistan after mount K2. 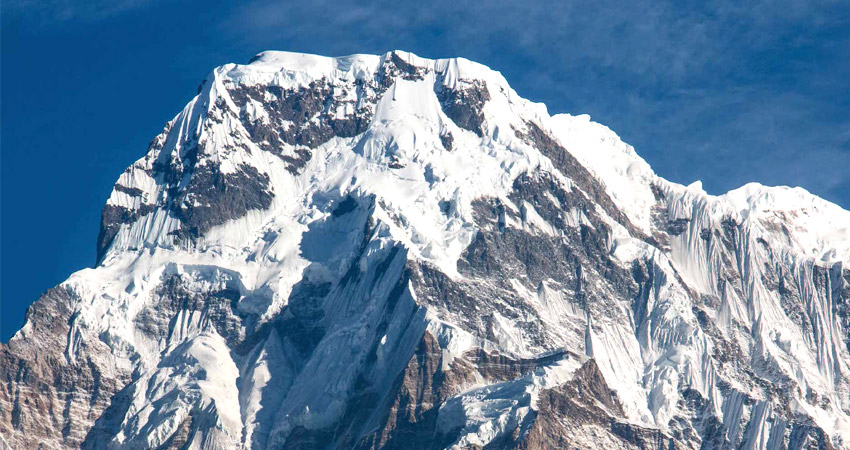 Mount Annapurna is the tenth highest mountain of the earth and last in our list of Top 10 highest mountains in the world. Located in central Nepal with an elevation of 8091 meters. Annapurna is a Sanskrit name that refers to the Goddess of the Harvests. This Annapurna peak which is the world’s most dangerous to climb. Annapurna conservation area is the first and largest conservation area of Nepal with 7,629 sq. Km. M. Herzog and L.Lachenal from France reaches on this mountain on 3 June 1950 as the first climber. Annapurna base camp trek is the gateway to climb this mountain. It is the largest conservation area of Nepal which covers many towns like Manang, Mustang, Kaski, Myagdi, and Lamjung with an area of approximately 7,629. Last but not least,

Mount Annapurna is another example of beauty and ability to be list on the 10th position in the list of top 10 highest mountains in the world. You can get the amazing view of Annapurna I (8091 m), Annapurna South (7219 m), Machhapuchhre (6993 m) and Hiunchuli (6441 m), glacier dome, Gangapurna (7454), fang (1647m). Moreover, the distance of the road varies between 160–230 km (100-145 mi), depending on where the motor of the transportation. And also, Annapurna trek is also the best long-distance trek as it is the combination of both cultural and natural beauty.
All in all, I hope you enjoy the reading of the Top 10 highest mountains in the world.

hope you enjoy the reading of the Top 10 highest mountains in the world.