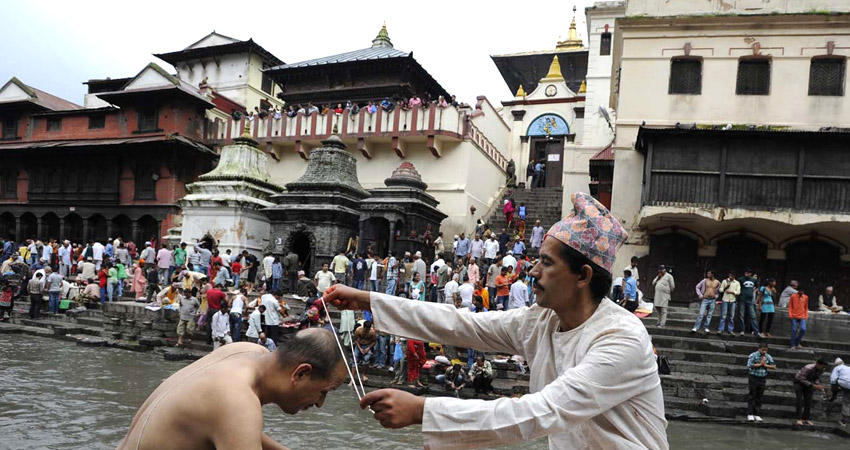 Festivals in Nepal begin with religions and flows with the natural spirit.  Festivals are rituals that symbolize the cultural sensibility of a particular group or a society. Janai Purnima festival is one of the religious festivals in Nepal.

In this sequence of festivals, rituals like MatatirthaAusi, Buddha Jayanti occur, and also Janai Purnima. Before knowing what’s done here let’s know what it is actually. Brahmans in society are regarded as pure souls who in their entire life has and will not commit any sin. The mindset of people is that Brahmins and sacred souls are interlinked. So, for this, a sacred thread is worn by them around their body which keeps them away from committing sins.

Janai is a string made up of cotton materials. It is worn across the chest by the Hindu male. Only Hindu males are supposed to use this thread in a religious ceremony called Bratabandhan.

As a sequence of rituals goes hand in hand the Janai is linked with some other ritual called Bratamandha. Actually, Janai is not worn by every single people. Randomly if some person put Janai it’s not given any worth. Janai is only worthy if it is put after fulfilling the criteria and performing a special ritual called Bratamandha. Janai is basically a thread that is worn around the body of Brahman boys. After the boys reach a certain age that’s more than 5 then Bratamandha can be done. In Bratamandha, some spiritual activities are carried out, and finally, he is allowed to put a Janai.

Now, as we know what Janai is let’s know what Purnima is? Basically, the full moon day where the moon is completely visible. That day is called Purnima. Nepal’s government will declare a public holiday to celebrate this festival.

Below is the RakshyaBandhan Mantra enchanted in the day of Janai Purnima:

In Nepal festivals are celebrated by gathering people, worshipping to god, through acts, dramas, performances of rituals. These are different ways of offering gratitude towards gods and goddesses. Festivals are marked as the day of happiness, togetherness, social goodness, longevity, and prosperous health of the person. The origination of various festival is different and based on its own stories.

In addition, it helps in minimizing the bitterness among the family members. It also brings joy, merry-makings in the family member realizing they should celebrate the rituals. People forget about their past, future and are mesmerized by the beauty of clustered festivals. Nepal has numerous festivals gathered on the calendar. Each is a special ritual, jatras occur which gives a picturesque view. With the rise of a year to its end there occur many festivals which flow as a cycle.

Janai Purnima is a ceremony where the changing of Janai (sacred thread) is done, worn around the wrist and so many more. On this day all the people who clean their bodies wear clean clothes and boys who have done Bratabandha unclutter the old Janai and offer the new one. All other people go to nearby temples and reach the priest. The priest offers them Janai and they wrap it around the wrist of people.

Then people give Dakshina to the priest and celebrate it happily. From the aged people to the infants have wrapped it around the wrist. People go to the nearest temples which are regarded as pure to offer Janai but the most obsessed place is Gosainkunda. Gosaikunda is a lake situated at a high altitude and in a distant place from the city areas or normal places where people reside. Going to Gosainkunda is actually a tough journey. You have to overcome lots of struggles to get to Gosainkunda.

In spite of all those obstacles, people get there just to celebrate it. There are many groups of people who go there on this day. Although the journey to Gosaikunda is exhausting, the pleasurable feeling after going there is beyond your imagination.

As a special dish kwati is eating.

Thus, the special moment is worthy of a challenging journey. There are people who are obsessed with the beauty of nature around here. Not only will these, but Goisaikuda also Possesses religious importance, going there gives you peace of mind and soul. People visit there, to pray for their family’s happiness, prosperity, and longevity.

in the Janai Purnima festival, Newar people offer different food items to frogs/ the agent of the god of rainfall. This is done to increase the production of crops by making happy to the god of rain.

Many beliefs are there regarding the Janai. During a popular festival called Tihar, there is a day Laxmi puja. On this day cow is worshipped. So, the Janai which we wrapped around the wrist of our hand is opened and it is wrapped around the tail of a cow. Any wish we make during this is said to be fulfilled by god.

At every festival, various kinds of food are regarded as special. Delicious food is cooked at various festivals. Likewise in Janai Purnima, there is also a special dish made called kwati. Ultimately 9 different kinds of grains are taken. It is soaked overnight and then cooked. All different kinds of spices are ground and put in it and a tasty curry is prepared.

On this special day, another special task is also done which is separately known as Raksha Bandhan. It is celebrated by the siblings. This occasion helps to flourish the relationship between the sisters and brothers. Every sister puts the Rakhi on the wrist of the brother. The Rakhi is either prepared by themselves or bought. For this occasion different kind of Rakhi is prepared and sold in the market.

Observe in the month of Shrawan, Janai Purnima is also called Raksha Bandhan. The literal importance of this festival is the festival, celebrated to increase the bond of purity and security.  All Hindus from different countries celebrate the Janai Purnima festival.

It is the sacred thread festival. On this day, Hindu men (Brahmin and Chettris), perform the ritual of changing Janai. They take a bath and change their annual Janai. Another will celebrates this festival by putting a sacred thread around their wrist.

The story behind the name Janai Purnima is interesting. The Janai is a sacred thread and Purnima indicates the full moon day. This is why this festival is celebrated on the full moon day of Shrawan according to the Bikram Sambat calendar. Another name of Janai Purnima is also called Shrawan Purnima. The answer to the question when is Janai Purnima this year: it is recorded as it falls on 30th Shrawan in Nepali date. Which also coincides with the English Calendar date of August 3rd,2020.

Rituals to perform during Janai Purnima

In these rituals, a person should make a clean long thread to wear the next day. Besides these, many priests sit in different places of the temple to put tika and tie thread to the pilgrims. All the devotees will visit their nearest temple to perform this ritual. On the main day call RakhsyaBandhan, a person take a bath and wear clean clothes. Then after they will visit the temple to receive tika on their forehead. They make themselves clean by shaving and cutting hair.
This day, they undergo partial fasting. As it is believed that, they should only eat after replacing the annual Janai. Additionally, on this day a person should eat only one meal.

Not only should this but the food they eat also be a pure vegetarian product. Some of the Brahmins also avoid onions, garlic, etc in their meal. For your kind information, there is this unique trait of Hindus that they should clean their body for every big event.
In the Purnima dawn, men regularly go to nearby rivers and ponds. And they take a secret bath by dipping their body. They dip at least thrice in the water. After this men will Change their Janai by breaking the old ones.

What is Rakshya Bandhan Doro?

The literal meaning of Rakshya Bandhan is associated with the protection of relationships. Rakshya refers to “to protect” and Bandhan represents “bond or tie”. Thus Rakshya Bandhan is the festival celebrated to make a stringer bond with their loved ones. Celebrating this festival makes a stronger bond. Females of all ages will tie the thread around their wrists. It is also called Doro in a typical Nepali word. Some people say it Janai or Dhago also. Not only women but all males regardless of their ages will tie it. Generally, women are supposed to tie it in the left wrist, and males are supposed to tie it in the right wrist.

This is the festival of brother and sisters closeness too. Both brothers and sisters will tie Rakhi in each other’s wrist and give blessings for their success. However, this Rakhi tradition is mostly followed in the Terai region. But nowadays people of the hilly and Himalayan regions are also adopting this tradition. Both of them pray for the long life and well-being of their sisters/brothers. Additionally, they exchange gifts and delicious food also to make them happy.

Doing so will promote their bonding forever. In the cities houses, the family in Nepal the priest visits the residence of people to tie Doro. Family members gather and the priest reads the important stories from the holy book and performs the ceremony. They also impart the importance of celebrating Raksha Bandhan. They do rituals to purify the new thread. Then, men will wear it across the chest. The priest/Pandit is then served with food, amounts of money as a return gift. The giving kinds of stuff are also called Daan in Sanskrit.

Another belief associated with this Doro is, it will bring them good luck in their life. Additionally, Doro is a symbol of love. It will make the family bond stronger. This Doro is kept safely till Dipawali. And on the special day of Laxmi Puja, the thread is untied and later tied on the tail of a cow. This is the very special ritual taken in Tihar. Doing this will fulfill your wish and washed away your sin. The thread can be found in various colors, such as orange, red, and a mix of other colors.
There is a belief that Hindus should cross the Baitarniriver after their death to reach heaven. Thus, the cow is supposed to help him/her to pass that Baitarni River.

They carry the dead to their tail and help to cross the river to take to heaven. Thus, tying Doro on the tail of the cow would make your place to heaven after death. On this occasion, a special meal called Kwati is cooked. in the Janai Purnima festival Kwati is made by mixing nine different pulses. The special Tejpatta leaves are also added to the Kwati soup to make it more delicious.

Nepal is also known as a country with lots of festivals. Celebrating festivals in Nepal is a way of exchanging happiness, showering love to family, relatives, and acquaintances. The prior region of celebrating the festival is remembering the past day and thanking God for these lives. Nepal is the country of multiethnic and multicultural. Due to which festivals differ from the different ethnic group and the ways of celebration is vastly different. Spread Happiness Celebrate Janai Purnima this year on the 30th of Shrawan, 2078. Above the Himalaya, the team is wishing advance Happy Janai Purnima festival 2078 and wishing for your prosperous health and well-being.

Looking for Annapurna base camp trek 7 days Contact us.