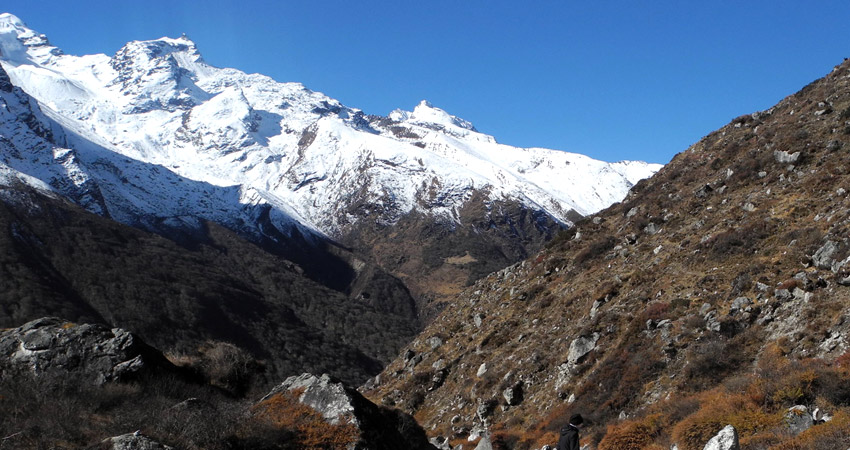 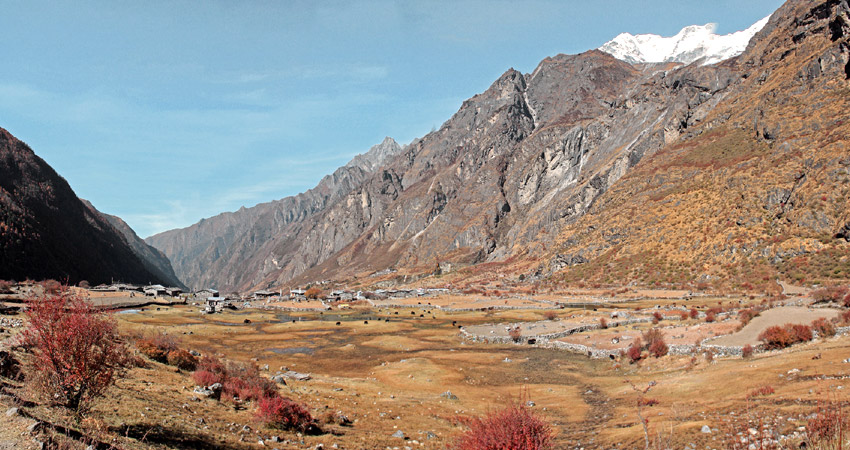 Langtang Valley Trek,  known as “The valley of glaciers,” is one of the famous and closest trekking regions from Kathmandu. Langtang valley trekking is a narrow valley that lies between the main Himalayan range to the north — bordering Tibet. It is a  slightly lower range of snowy peaks to the south. A visit to the Langtang region offers an opportunity to explore typical villages. Small mountains, and visit glaciers at a comfortably low elevation. Langtang is one of the most popular trekking regions because of its easy access from Kathmandu. Those wishing a short trek from Kathmandu into the Himalayas influenced by the Tibetan lifestyle.

Nepal Langtang valley trek allows you to get right in among the Himalayan peaks and to get off-the-beaten-track. We are walking through some fascinatingly remote and relatively unpopulated areas. Because of its valley offers the varieties of rhododendron, bamboo forests. With its majestic waterfalls, pine forest, swift mountain streams, and rugged rock. Snow-capped peaks, grassy down and meadows strewed with daisies and wild animals making the trek one of the most diverse treks.

A Journey to Langtang Valley

The journey of Langtang Valley Trek trail starts with the drive from Kathmandu to Syabru Bensi. So in the upper part of the Langtang valley, snows Ridges are spanning angry torrents. Because of its high passes enveloped in mist tiny lakes of crystalline brightness and glaciated mountain giants. Because of its mighty Langtang Lirung (7246m) dominates the valley to the north. Gang Chen (6388m) and the trekking peak of Naya Kangri (5846m) lie in the south, and Dorje Lakpa (6966m) protects the east of the valley. The area was designated as Nepal’s first Himalayan national park in 1971. The 1,710 sq km Langtang National Park hosts a variety of natural splendors. Due to lush valleys alive with languor monkeys to the towering fir and rhododendron forests bursting with spring color. So in this valley, besides natural wonders, you also visit the local Tibetan village and see their lifestyle.

Animals and Peaks along the trail

Langtang Valley Trek passes through an ever-changing climate and offers trekkers an exceptional diversity of scenery and culture. Tamang, whose religious practices, language inhabit Langtang valley expedition area, and the unique dress is worth enjoying. According to a legend, a lama following a runaway yak discovered the valley, hence the name -Lang (Tibetan name for YAK), Tang (more currently “Dhang” means to follow) was given. A variety of sights, including Buddhist monasteries, a cheese factory, and yaks, make this trek an exciting one.

There are excellent opportunities for moderate climbing excursions here, therefore allowing some extra days for exploration of the extensive glacier system in beautiful Langtang valley. On the way view of spectacular scenery with the breathtaking landscape As a result will make this trek something to remember for some time to come!!!!

Duration: 10 Days from Arrival to Departure

Best Travel Time: February – June, September – November are the best seasons. However, July & August are okay, and trekking can be done but not so clear visibility due to rain.

Trip Snippets: 10 days, 2 night’s hotels, 7 nights Lodges, Breakfast in the city breakfast, lunch, and dinner during the trek is included.

Departure Dates: We can offer this trek on any dates during the months Feb, March, April, May, June, Sept, Oct, November, and December for a group of 1 to 12 people.

Equipment rental: We advise you to bring all of your clothing and gear from home, however in Kathmandu there are many shops to buy and rent trek related equipment

Your trek Backpack/Duffle bag: Our porters will carry your baggage on the trek; the maximum weight per trekkers is 15kg, including your sleeping bag and down jacket; other items not required on a trek can be stored in our office or your hotel in Kathmandu.

We will meet you at Kathmandu Tribhuvan International Airport and transfer to your hotel. When you have had your time to settle in and freshen up after your long flight, you will be invited to visit our office for a briefing about your program. You will have a meeting with your trekking guide and discuss the equipment needed for the trekking, and we will process for the trekking permits. If you arrive at night, we will have the same discussion in next day morning after breakfast.

After morning breakfast, we drive out along the north-western hills of Kathmandu for about 7-8hr. You will witness the beautiful scenery of white snowcapped mountains like Mt. Annapurna II, Manasalu, Ganesh Himal, and other minor peaks along the route and as well as green scenery of hillock, rivers, and village. Enjoy the Himalayan views and mountainous lifestyle through the terraced fields and rustic villages. The landscape of foothills and ridgeline vistas goes through the Trishuli Bazaar, Betrawati, and Dhunche. You feel as if you are heading towards deep land. We take our Lunch at the Trishuli Bazaar before continuing further toDhunche. We descend to Syabrubesi for the overnight stay.

The first day excitement trail crosses through the Bhote Koshi River flowing down from Tibet and following the Langtang Khola. After a visit to the Gompa of Guru Rinpoche, follow the stone-paved main street out of town over Langtang Khola. After crossing the suspension bridge, the trail gradually ascends to Bamboo passing by a landslide. The trail goes through the subtropical forest, which is cover by oak and maple, massive spruce, fir, and blue pine. We pass through the forests of oak and rhododendron. The variety wildlife; yellow-throated martens, wild boars, Langur monkeys, red pandas, and Himalayan black bears, etc. are inhabitance of the forest. Afterward, your trek ascends gently to Rimche (2400m). And In the end, your trail is level to the Lama Hotel for the overnight stay.

The day starts with a gentle climb, but it soon becomes steeper, climbing through wild forests of hemlocks, oaks, maples, and white and pink rhododendrons high above the Langtang Khola. The tantalizing glimpse of the snow-capped peaks starts appearing along with a fleeting view of Mt. Langtang Lirung (7244m) through the trees. The trail leads to a log bridge, and on climbing further, we come across lush meadows of Ghora Tabela (2992m). The trail ascends gradually as the valley opens up into classical U-shaped glacial. Follow the path across the helipad and yak pastures, climb briefly through rhododendrons, and scattered Tamang villages. The trail crosses a stream and climbs past several water-driven mills and prayer wheels to the large settlement of Langtang (3430m), headquarter of Langtang National Park. The village has flat-roofed Tibetan style houses, and elaborately carved driven windows of the upper town are worth exploring. Valley is surrounded by stone walls enclosing fields where buckwheat, potatoes, wheat, turnips, and barley are planted and easy to find yak and the wild goats wondering around you.

The trail winds through the village and climbs a ridge topped by a large chorten. It then climbs gradually past an impressive mani wall, crossing a stream to the small village of Mundu (3543m/11,621ft). After crossing several small streams with wooden cantilever bridges and moraines, you can finally see the monastery of Kyanjin Gompa and the dramatic icefall flowing from the peaks of Langtang Lirung and Kimshung. The surroundings are attractive also because of the famous Government operated cheese factory. We have a chance to test cheese and curd by Yak milk; it is remarkable in this place. After having lunch, we can explore the area with abundant panoramic views of Langtang Lirung (7246m), Genjempol, Kyangjin RI (4750m.), Tsergo RI (5000m.), Ganja la (5160m.), Langshisa- Ri (6427m.), Dorje Lhakpa (6430m.), Naya Kang (5844m.), Yala peak (5500m).

Today is the rest and exploration day of the trekking. We visit the monastery and the cheese factory or may walk up the moraine to see the spectacular ice faces and tumbling glaciers of Langtang Lirung or ascend Kyanjin Ri (4350m) and Tserko Ri (5,000m), which is the highest point of this trek. Hike easy for a breath-taking panorama of the Langtang Lirung, Langtang range, Kinshung, Yansa Tsenji. We also have options to make a side trip to Langshisa Kharka. There are several alternatives sided tours, the surroundings areas of North having many smaller uninhabited valleys. Spend your night back to the Kyanjin.

Have your breakfast with observing surrounding genetic snowy capped mountains breathtaking view. We will follow the same trail back following the Langtang Khola to Langtang village and on to Ghora Tabela. After having a lunch stop continue the steep descent to Lama Hotel. All the way downhill, you will see fantastic views of towering mountain what you have missed on the way up.

Today after breakfast, we hike back to Syabru Bensi. The trail is mostly downhill through the lush green vegetation with enjoying fascinating views of Mountains and green hills. We can walk along the rising and falling path leading to the village, which provides us the opportunity to get a closer look at the customs and culture of the Tamang ethnic group. Reach to Syabru for the overnight stay.

We will drive back to Kathmandu through the road, passing terraces, streams, rivers, local settlements, high hills, and along the Trishuli riverside. It takes about 7 to 8 hours (conditional) to reach your hotel in Kathmandu. In the evening, join a farewell dinner in Nepali typical Restaurant with the memories of your trekking adventure. Have some time for a stroll over the streets.

Today is free or the last minute. You have a few hours of unique shopping for your relatives. If you have more time, you can do some shopping or sightseeing. We will drop you to the International airport to catch your flight back to your home and wish for your Safe journey.